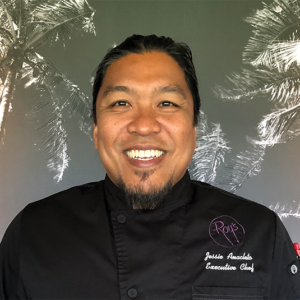 Jessie Anacleto was born and raised on the island of Kauai. He grew up experiencing the different flavors of the many different ethnicities and cultures that make Hawaii unique. He found his calling at the young age of 15 when he accepted his first job in the kitchen. Starting at an entry level position, Jessie quickly rose to higher positions through showing hard work and dedication. This dedication turned into passion, which led him to enroll in the culinary program at Kauai Community College. Jessie wanted to further his knowledge, so he enrolled into the Culinary Institute of America in St. Helena, California. Shortly after returning home to Kauai, Jessie secured a position at Keoki’s Paradise in Poipu as Sous Chef in 2009 and then was promoted to Executive Chef in 2010. He again felt the need to expand his knowledge and skills, this time in a fine dining atmosphere which is when he decided to join Roy Yamaguchi’s Team at the Kauai location in 2014. After completing the rigorous 3 month training program he was offered and he accepted a Sous Chef position with Roy’s on Maui. He and his Fiancé, Kayleigh made the move to start a new chapter in their life. So far 2017 has proved to be an exciting and challenging year for Jessie as he and Kayleigh had their daughter, Harleigh in February, then in July he took the helm as Executive Chef of Roy’s Kaanapali.