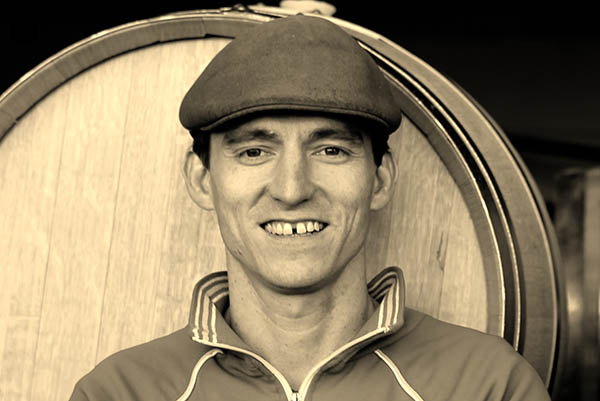 It is common for winemakers to talk about their practices as a “philosophy,” but few approach wine as philosophers. Tyler Thomas is that rare winemaker, who always asks questions about what it means to make great wine, and takes this curiosity with him to the vineyard and cellar every day. Growing up in St. Louis, Tyler’s interest in wine was sparked by his French grandmother who paid great attention to food preparation as well as food’s important role in the family. “Sitting around the dining room table dominates my childhood memories,” he says. “I would never have taken a wine class in college if not for her.” At Colorado State University, Tyler studied Botany. He was drawn to the program’s broad focus, which allowed him to create a custom curriculum. “I studied everything from philosophy to politics, and even back-country skiing. Botany provided a science foundation which would later become very valuable to making wine, but I also developed historical and classical foundations which I believe are equally important,” he says. While in college Tyler enrolled in wine tasting classes, joined a wine club and began hosting family dinner night for his roommates. “I’ve always enjoyed wine with my family, but after taking these classes I began to understand the kinds of wine I liked as well as the history.” After completing his B.S. and M.S. from Colorado State University, Tyler and his wife took time to travel before starting their careers. Over the course of their travels, which began in New Zealand and continued through the European Union, they visited several wineries and befriended the local winemakers. “On our way home, with only $200 to my name, I told my wife I wanted to pursue a career as a winemaker, and the rest is history.” Tyler earned his master’s degree in Viticulture and Enology from U.C. Davis, where he learned all about the science, chemistry and production of wine, but the most valuable skill he learned was how to approach winemaking with critical thought. Working with Professor Mark Matthews at Davis taught Tyler to single out the things that make a wine is the way it is, providing a framework for thinking about winemaking choices. “His contrariness appealed to my nature, because you learn sometimes it is important to challenge unquestioned answers.” Tyler’s first job came at Hyde de Villaine (HdV), where he worked closely with winemaker Stéphane Vivier. For Tyler, working with a Burgundian winemaker who made wines from California fruit with a French attitude was transformative. “He paid intense attention to what was essential, and had a laziness to everything that did not make a difference,” says Tyler. Tyler took a hiatus from HdV following harvest to conduct vine physiology research in New Zealand and Germany, through grant money awarded as a result of his work at UC Davis. While in Germany, he traveled extensively through wine regions, marrying his academic background in science with his philosophical ideas of the wines he wanted to make. “As Americans, we are taught to quantify concepts like freshness and sweetness with a number, but European winemakers are more interested in what the wine actually tastes like and its overall balance. To learn this way of thinking, I’d question everything. When I’d ask winemakers what they meant by ‘tension,’ they’d open a bottle and show me.” Upon his return to HdV, Tyler spent the next four years embracing the winemaking ideal that less is more. Tyler brought this ideal with him when he became winemaker at Donelan Family Wines in 2008, and transitioned the winery to a more vineyard-driven style which he achieved through less intervention and more winemaking restraint. “While bigger in style, our wines were evoking site-specific qualities and had a wide range of flavors and texture. This approach to evoking site became my trademark.” Tyler’s affinity for the Central Coast began long before joining Dierberg and Star Lane Vineyards in the summer of 2013. His first full-time harvest internship was at Lompoc-based Fiddlehead Cellars in 2003—but the choice to return came only after several meetings with the Dierberg family. “The attitude of many of my winemaker friends was that you don’t leave Hollywood to make movies in Texas. However, the chance to work with great estate fruit, and a family who is invested in making great wines in a region with tremendous freedom and opportunity to develop something unique, made it an easy decision,” he says. “I believe the world’s great wines have three things in common: they are connected to a specific estate, they have a long-term consistency, and they transcend their generation. I see this potential at Dierberg and Star Lane Vineyards.” Outside of the cellar, artisan bread baking is Tyler’s offseason ferment. He also enjoys spending time outdoors hiking and cycling with his wife and kids. When possible, family trips are planned in part to correspond with the St. Louis Cardinals game schedule.