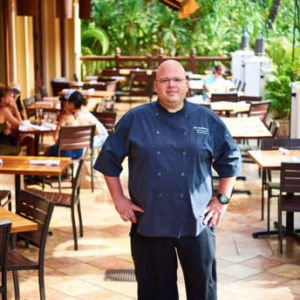 Amherst NY native, New Orleans-reared Chef Jason LaMotte has lived between Oahu and Maui now on and off for the better part of the last six years. Having graduated from Paul Smith College for the Culinary Arts, Jasonworked his way up in the culinary world, with a career built upon successes at a variety of restaurants in New Orleans with John Besh and in Europe. In 2009, while working as the Chef de Cuisine of Gordon Ramsay’s Prague outpost, Maze, he and his staff were awarded a Michelin star. Jason is working with local farms to incorporate his commitment to the finest ingredients by utilizing local first and organic when possible produce into the Tommy Bahama kitchen.