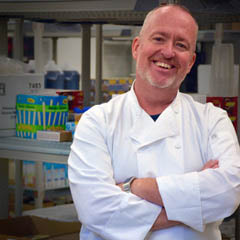 
Brant Holland is a Chef Instructor at The University of Hawaii Maui College Culinary Arts Program. His Purchasing and Cost Controls class executes all the weekly purchasing and receiving for the Culinary Arts Program. In addition to this, he teaches the Menu Merchandising class.
Brant is originally from Huntington Beach, California. After graduating from the American College of Switzerland; Brant worked his way through the kitchens at The Hard Rock Café Los Angeles, Trumps, and Michael’s in Santa Monica. Soon after he attended cooking school at and graduated from Le Cordon Bleu London. While living in London, Brant worked at the now Two Michelin Star Greenhouse in Mayfair. In 1988, Brant went on to work for Wolfgang Puck at Spago, Hollywood. After fourteen years, twelve restaurant openings, working as a chef, general manager, and corporate executive chef; Brant left Los Angeles and Wolfgang to move to Maui in 2002. Since arriving on Maui, Brant most notably has worked at Alan Wong’s Amasia at The Grand Wailea and at The Millhouse.